Once the donkeys had settled in for  twenty-four hours, we let them roam in the much larger pasture that Scott had enclosed adjacent to the smaller one that the Wonkey Donkey Shed opened into. They were very eager to explore and play. It was such a delight to watch them run, kicking up their heels and chasing each other around the hilly terrain. We couldn’t imagine how terrible it would have been for them if we had decided to separate them. Luckily we didn’t.

I did my research and knew that I should get them neutered if they were to be less aggressive as they got older. I called the vet that the alpaca owners had recommended and he came out one day and proceeded to do their operations lying on the grass. Their testicles had not yet descended, so they actually needed to be operated on. Either way, I am sure it’s traumatic. It was completely new territory for me being the vet’s assistant. I cradled their boxy heads as he did the surgery and felt like I was transported into a James Herriot novel. The boys did really well and their incisions healed up cleanly and quickly.

Scott, Will and I worked on building a shelter for the alpacas. Copying what they had at their current residence, we had ordered a kit to make a “star-shelter”.

This is a five sided building composed of large triangles. We used a large round swimming pool liner for the roof. The sides were open, as the idea was that they required shade for the summer and a place to have straw for them to sleep on, more than a fully enclosed structure. We also purchased several wheelbarrows to gather up their poop (they create communal “toilets”, which makes it easier to do this. Many people love to use alpaca “beans” on their garden. I wondered whether doing so would be regarded as exploiting the alpacas by some vegans). Regardless of whether we use it, or dump it, or give it away, the fields do need to be cleaned up at times if we want them to flourish. We also had to purchase water tanks and feeding dishes and grain along with a long list of supplies that the owners thought we might need in an emergency. Even though they were letting their boys go, they still cared for them deeply and wanted to ensure that all the alpacas they were relinquishing were going to the best possible locations.

The final thing that had to happen before they were delivered to us was that they needed to get sheared. I offered to go help. When I got to their farm, I saw that I was going to be part of a team of about eight people including the two traveling shearers. The alpacas were owned by a mother and daughter team. The daughter was about my age, while the mother was a good twenty or more years older. Watching her wrangle thirty or so alpacas while keep us all on task and coordinated in our actions, was impressive. I realized that taking care of our farm could really be good for my own health and dexterity in the long run.

Shearing was intense! Some of the alpacas were not upset by it and some were. These ones shrieked and spit. It was quite distressing for me to see them being so unhappy, but I honestly did not see any of them get cut or hurt. The shearers kept their instruments sharpened and oiled and knew exactly what they were doing to get it over with quickly. The process is that they are brought into to an area with a clean floor and then their legs are tied. The front ones are pulled towards one pole and the back ones to another. The shearers do their first cut, and remove the longest and best part. Then they go back and do a second cut and a third. The third cut is just trimmings and is usually tossed. Some folks do utilize the second cut, but it is the first cut, or blanket, that is prized.  After shearing, but while the animal is still tied up, If it’s needed the shearers will also trim the alpacas teeth, their toe nails and also give them any shots or oral medication. Once they are up on their feet, the owner gave them a quick spritz of lemon scented oil, to keep them from fighting with each other due to their new looks, and sent them back out to the pasture. Several of us worked on our hands and knees  on the floor, quickly gathering the fleece and putting it in garbage bags that had already been labeled.  It was important to work fast and keep out of the way of the sharp clippers. Each alpaca had two bags, one for the first cut and another for the rest as the owners didn’t want to use the seconds. Since they were going to throw it away, I asked if I could keep these bags and I still have them. One day I would like to felt a big blanket for a yurt, or perhaps felt a bunch of small animal houses for feral cats, or other critters. 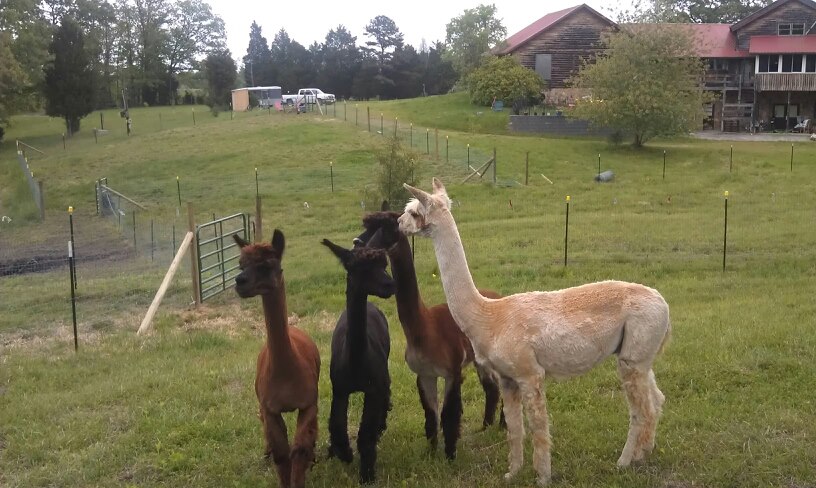 The alpacas went from being large fluff balls to skinny little things and they seemed a little embarrassed as well as curious about each other. Now that we have done this twice here at our own farm, I know that they must in fact look forward to getting sheared as our guys all timidly, but also hopefully, approach the area where they are to be sheared. It must feel good to be rid of their heavy winter coats when the days are getting warmer and warmer. We try to time it right around the first of May. It’s a bit of a crapshoot if it will still be cold at night, or if the weather will be uncomfortably hot in the daytime.  The next day the alpacas were delivered to our farm.

We have kept their names, although some have nicknames. Our boys are Stormy; he’s white with spots on his cheeks and blue eyes. He is a suri, which means he has straightish hair. He’s our oldest fellow and is always slightly gaunt looking no matter how much I try to fatten him up. In spite of his name (he was born in a storm) he is very mellow. I call him Zen Cat. 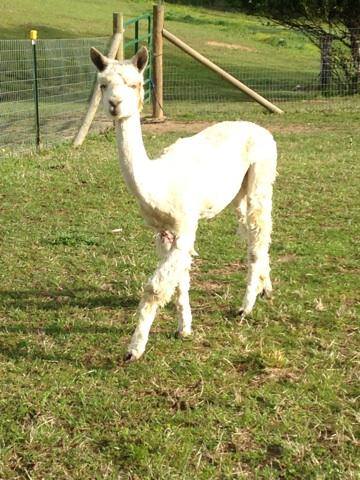 Our other Suri is Alvin. He is large and golden brown. He is a natural leader. Carlton is our handsomest guy. He is a rich chocolate brown Huacaya, which means he has thick crimped hair. If there is a fight he s involved and he won’t let it go.Then we have Chip. I call him Chiplett. He is quite short and a lovely reddish brown and grows a huge thick coat. He is also a Huacaya. Last but not least is Rudy. Rudy is a charmer and he is also rude. He is the one that is always trying to stick his head into the bucket when I am feeding them to get the first bite. His name is appropriate! He is various shaded of brown and beige and has greenish eyes. They are all lovely and have distinct personalities.